Remembering Christmases past can be a melancholy exercise for an old man. All of the grown-ups that told me about Santa Claus died years ago but I can’t get them out of my mind … not them, and not the trees.

In West Palm Beach circ. 1950 you could tell a lot by a family’s Christmas tree. Patsy’s dad, Dr. Stephens, always had a Canadian spruce that was so tall it had to be set up in the stairwell of their huge two story home on Greymond Drive. Sammy Bigbie’s family just cut down one of the scrub pines on the Bailey property next door and Kenny Yonovitz, a Jew, never had one in his home on Washington Rd. The ornamentation was always different too. Multi colored vs. all white vs. white and blue lights. Angel hair vs. tin foil ice cycles vs. spray on or soap flake snow–plastic angle or star on top … the list goes on and on.

Yes, we all remember the trees, but in my family they had a special significance. We earned a portion of our livelihood by selling them. Every year, around Thanksgiving, a refrigerated SCL railroad boxcar would be spotted in back of the Powell Bros. Produce warehouse on Clare Ave. and bundles of tightly bound trees from British Columbia would be off-loaded to trucks. The next stop was Ingram’s Supermarket on the corner of Belvedere and Lake Ave. Here, the trees were freed from their wire bondage, shook out, and leaned against the east side of the building where they would be sold to holiday shoppers.

Over the years, half of my high school buddies from the south end of town earned Christmas money by selling trees at Ingram’s for my Daddy. Running the Christmas tree lot even let my father play Santa Claus to quite a few families in the Palm Beaches. Some PBHS moms (Mrs. Browning, Mrs. Watson, and Mrs. Varney come to mind) picked up, as Christmas gifts from Powell Bros., some of the prettiest trees on the lot. The ladies were public school lunch room managers and among our most valued customers.

The net result of being in the business was not what you might expect. The Powells never had the prettiest tree in town. In fact, we always had “anything but!” By the time my mother had time to go by Ingram’s, the lot had always been picked over and the only trees left were too short, too spindly, too dead and dried-out, or too misshaped to be sold. Looking back … it made no difference. It was my family’s Christmas. We had a loving home and the world was right.

All of these thing happened some sixty years ago. Since then, Dee and I have raised a son and a daughter, seen the birth of five healthy grandsons and witnessed the evolution of everything around us. Nothing is same as it was: not my telephone, not my entertainment media, not the political discourse, not the climate, and certainly not my ageing body. Isn’t it gratifying that at least the Christmas tree, with its religious significance and magical charm, has weathered the test of time and remained as we all remember it.

Following this line of thought, I decided to take the time this morning, before the first of three NFL Football TV broadcasts and accompanying adult beverages numb my senses, to share my wonderful wife’s 2019 Christmas tree with all of you. 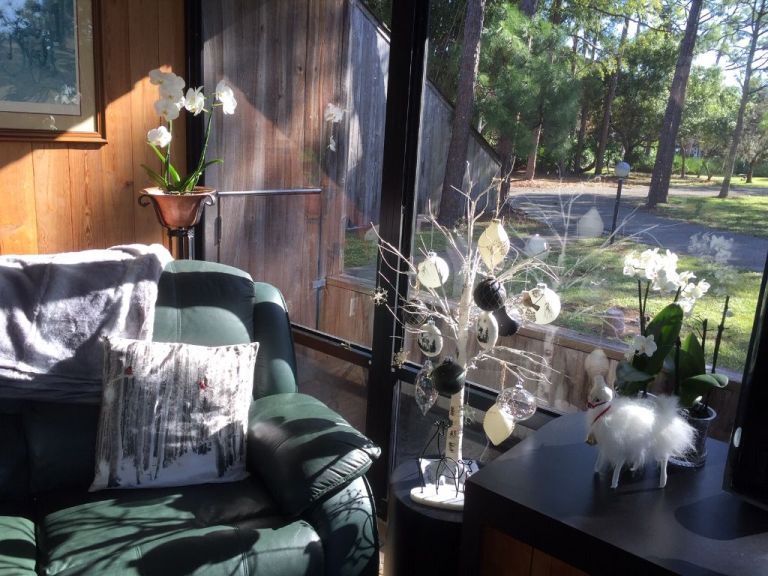 Maybe my memory should be added to the list of things that aren’t quite the same?