My life has drastically changed over the last few months. I’ve been forced to sequester myself inside the confines of my home for all but a few, very cautious, sojourns to the post office or super market. The old standby to combat boredom, television, has morphed into an archival Dempster dumpster of Hollywood film castoffs mixed with highlights from ten or twelve-year-old sporting events. The programming is so bad that even the commercials are an embarrassment–last night the evening worship broadcast of a prominent evangelical pastor was sponsored by an AID’s medication called Descovy featuring an elegantly coiffed drag queen along with encouragement to …

… GET TESTED REGULARLY FOR HIV AND OTHER SEXUALLY TRANSMITTED INFECTIONS.

To add to these disruptions, like most other people, my life has taken some unexpected day-to-day emotional turns. I’ve recently lost a friend that I had become very attached to. He lived close by and had gotten in the habit of dropping by virtually every day for some refreshment and a short conversation. Sometimes he brought along his buddy but, probably because of this COVID thing, they always stayed some distance apart. Anyway, both of them have stopped coming around. Even though I like to think I don’t live in a high crime neighborhood, word of mouth on the street is that fowl play was definitely involved in their disappearance. 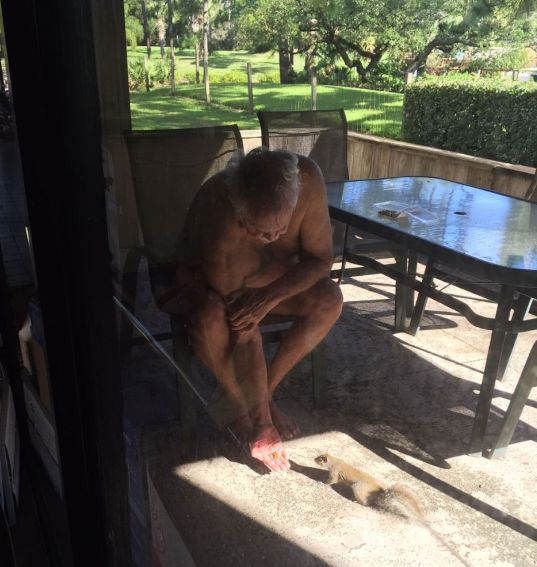 Making a short story even shorter and offering a little explanation–I lost that friend when “Gimp” stopped coming around for a few pecans and cashews. His buddy “Little Guy” disappeared at about the same time. That was a month or so ago and corresponded with two big hawks taking up residency in the surrounding pines as well as an increased serenade of WHOOing being heard from the oaks across the creek after the sun goes down.

There is an old axiom that: “Nature abhors a vacuum” and with the void in my life caused by the absence of my friend–things have abruptly begun to change. It could have been subliminally prompted by all of the attention that the “BLACK LIVES MATTER” movement has generated or maybe was just a byproduct of those Sahara Winds the weatherman is always talking about, but last week I had a very unexpected visitor. He was a dark stranger from Africa complete with multi-colored garb and an entourage of female attendants. I hadn’t notice his mode of transportation upon his arrival but he projected elegance and a totally self-assured demeaner as he walked straight up the driveway to my house … then paused momentarily by a puddle of rain water before jumping with a “thump” against an exterior wall and unabashedly peering in through a picture window.

Now he has found a new home. I’ve given him the name of “Bomber” for his habit of unexpectedly dropping in. He’s a Red Headed Agama and his kind have become quite common in Palm City. Hear tell, that his clan did come from Africa but he clams up every time I ask him about it–probably worried about his immigration status. He’s seldom much of a conversationalist but never fails to give me his undivided attention in our verbal exchanges. Unlike the squirrels, he’ll eat just about anything but prefers fresh Bing cherries or crumbs from a cranberry-walnut pound cake. He keeps his harem of lady friends around for company but doesn’t look kindly on “other guys stopping by for a chat.” As far as the “hanky-panky” goes … it looks like he’s playing it pretty cool–they chase him more that he chases them.

Having freed up most of the slots in my busy calendar, I find myself spending more and more time talking with Bomber. I’ve asked him about his fears and aspirations: he just wants a steady supply of termites to go with the fruit and pastry hand-outs and one look at my old house will allay any concerns in that department. As far as the fear factor is concerned–he doesn’t seem worried about winged predators but is aware that there hasn’t been a long lasting hard freeze at this latitude in years and one is long over-due. He told me that if the temperature does drop, he and his entourage may need to move inside for a night or two. I haven’t broached this subject with my wife yet–maybe wait awhile.

What really grabs my attention in speaking with my new-found African friend is his obvious and genuine concern about, not himself, but what makes me tick? He seems unusually interested in my mental wellbeing and asks repeatedly if I have any active social life other than what I have revealed and demonstrated in my talks with him?