If you don’t mind, I would like to be included in the nerds grouping for purposes of mention in the up-coming chronicle on the Class of “58”. To qualify for this assembly I offer a rambling of seemingly unrelated instances and observations that have convinced me to make this request.

Nothing can prove more detrimental to the long term financial success and overall happiness of a young man than to be “popular” at an early age. This is especially true if this popularity results from achievement in athletics.

In the United States today few people are held up as male role models more often than NFL, NBA, or Major League professional athletes. As early as middle school you hear coaches and spectators refer to a promising player’s chances “at the next level”. It is particularly disturbing when you read in the newspaper that a star high school running back has signed with a certain university because “Coach Smith promised me I wouldn’t be switched to defensive back and the team would be on nationwide TV three times my freshman year”! Presumably, this would aid in his chances to get to the “next level”.

With this mindset and without regard to such campus distractions as English Lit or Calculus, the next level will almost always be outside of professional sports and very disappointing. In 1996 the Florida Gators won the National College Football Championship. In 2006 a researcher tracked down all but a few of the team members to document a “Where are they and what are they doing now?” magazine article. Not to disparage anyone’s occupation but if you eliminated sanitary workers, prison guards, used car salesmen and the temporarily unemployed from the list you would not be able to field a team for the “old timers game”.

Things were different when I went off to college in 1958 but not that much different. As a scholarship football player at Georgia Tech I had achieved, in my estimation, the pinnacle of success by being given the opportunity to gain a degree in engineering without having to pay for it. There was no “next level”. The NFL was a shadow of what it is today and when I graduated in 1963 my pay for my first job at Lockheed was almost as much as my junior year roommate, Joe Auer, earned in his rookie season with the Buffalo Bills.

By 1966 I had been back in WPB working in the family produce business for over two years and Joe Auer was traded to the newly created Miami Dolphins. One night, during the first week or two of two-a-day practices at St. Andrew’s School in Boca Raton, I visited Joe in one of the dorms and had my first “what do you do?” questionings by guys at the next level. By this time pro football player’s pay had increased but so had the insecurity that came with the nightly visits from the “Turk” (the coach designated to notify individual players when they had been cut from the team). When Joe introduced me as his friend in the fruit and vegetable business I was surrounded by his teammates wanting to know what I did and if it might be something they could do after……………you know……….the “Turk”………. 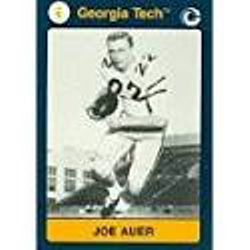 Against the Oakland Raiders, Joe Auer ran the opening kick-off of the Miami Dolphin’s first ever game back for a 95 yard touchdown and was the team MVP in 1966. He retired from football a few years later and after two ill-fated investments in the NASCAR arena he disappeared; I guess he’s at the next level?

Over the next 27 years I pretty much lost contact with my teammates from Tech but I had learned that of the 28 guys on my freshman squad, 2 had killed themselves and one had been committed to a mental institution.

It was with this backdrop that I went to the Georgia Tech Homecoming in 1993. I had been much closer to my fraternity (Phi Delta Theta) brothers than to the other jocks at Tech. The “T Club” was an elaborate Greek like social club set up by the Athletic Director for athletes. Membership had only two requirements: 1) be the recipient of a varsity letter and 2) pay a one time $5 initiation fee. I could never justify the expenditure.

I have forgotten most of those three or four days in Atlanta but on Saturday morning before the Homecoming football game I was in the fraternity house with a group of brothers including Senator Sam Nunn. It was while I was talking with Sam and a Federal Reserve banker friend of his that someone tapped me on the shoulder to tell me that a bunch of my teammates were down in the basement level of the parking garage across the street and that I “should come on down”. The Phi-Delt house is on a small hill above the parking garage and to get to where my beer drinking gridiron comrades were tail-gating required me to go down a series of stairs to the “next level”. One of the first question I was asked was….you guessed it……what do you do? Tech was primarily an engineering school but there was a School of Industrial Management and since this was the discipline of least resistance most jocks gravitated to it. When I returned their queries and asked about their current employment, I seem to remember the “between jobs” position mentioned frequently.

Everyone of the men in that parking garage, myself included, had been one of the most popular boys in their high school class. Everyone of those men, myself included, had been coddled and pampered by an adoring society that emphasized only what seemed important at the moment; the ability to break a tackle or catch a forward pass. As teenagers we were extremely popular and continually assured that this ability would always enable us to get to life’s next level.

I don’t want to come off as an elitist, but a walk of a few yards and a decent of 40 or 50 feet had taken me from a world of men who had been, and continued to be, achievers to a group of guys that had, for the most part, reached the zenith of their lives in their early twenties.

At the risk of alienating some of my old Wildcat and Yellow Jacket teammates, I would like to make this seemingly selfish request. On the hunch that I’ll be much happier at a 2013 reunion banquet table with a group of fellow nerds please allow me to rise to             ………………..THE NEXT LEVEL.